The Public Utilities Commission acquired 10 acres of property to give the power plant more space and for a well site. A large portion of the property had previously been used as a dump. Groups interested in “City Beautiful” plans had discussed beautifying the grounds, but no real action was taken until the Great Depression.

During the Depression era of the 1930’s, many Clay Center residents found it impossible to pay their water and light bills. The Public Utilities Commission decided rather than disconnecting those customers who could not pay their bills, the Commission would give the customers the opportunity to work off their bills at the proposed park site. The beautiful natural stone walls along 4th street are among the many highlights of the Utility Park. These stone walls were constructed entirely by the workers and still stand today.

The Park officially opened in 1933 with an ice cream social and band concert. In 1934, the City Beautiful Committee entered Utility Park in a national contest sponsored by Better Homes and Gardens Magazine. Utility Park won, “The More Beautiful America Award,” and a plaque stands in the park to commemorate the award. A fountain was installed in 1936. In 1960 acreage was added for picnic areas. In 1963 “Kiddie Corral” with playground equipment was added. The Gazebo was designed and built by the Power Plant employees in 1980. More acreage was later added to the west of the Zoo to serve as walking paths.

Utility Park is supported and operated entirely by the Public Utilities Commission as a gift to the citizens of Clay Center. No taxpayer dollars or mill levies are spent on Utility Park.

The zoo began with a pair of wild ducks that were tamed early in park history. These ducks lived along the water stream in the park and the birds remained from year to year, hatching young ones to maintain their small flock. 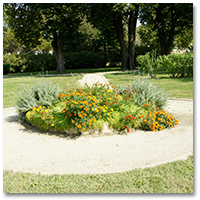